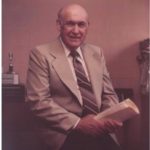 Mr. Ralph Froman touched many lives in Brookville/Franklin County over many years.  In 1948, he came to Brookville as a principal, teacher, and coach at the Lew Wallace Elementary School.  In 1961, he became the first principal of the new Brookville Elementary and remained in that position until his retirement in 1981.  He passed away on March 19, 2006.

Froman was a compassionate, caring, and giving person in his relationship with the youth and community.  He was a leader in education for some 33 years.  He was known for his penmanship and the teaching of it to his students.  Froman was also instrumental in the construction of the 1961 Brookville Elementary School, development of the Special Education curriculum in the public schools, and in 1963 establishment of the Work Activity Training Center (WATCH) now known as Achieva – A shelter workshop for special needs persons, and organized the Special Olympics in 1968.  He was Boy Scout Scoutmaster for over 20 years.  Froman was always striving to make the educational environment better for his students.

Mr. Froman was always involved in community activities.  When Harold Heap passed away leaving a match challenge to the community for the construction of a new swimming pool, it was Froman, along with other community leaders who stepped up to collect money for the match.  The result being The Harold and Edna Heap Memorial Pool in Brookville.

Froman was instrumental in having a walkway added to the construction  of the new highway bridge on Road 101 for the safety of students and community walking to the Brookville Elementary School and persons living in Riverview Subdivision.

Mr. Froman was always concerned for the needs of his students.  While principal, he observed student with personal needs such as clothing, shoes, glasses, and medical care. He would take them to Popper’s store or to the doctor.  He used money from various organizations to provide funds.  In 1981 when Miss Hannah Popper, a former teacher, passed away, it was Mr. Froman and Mr. Jim Mullin of The Brookville Foundation who set up an endowment from the Popper estate to provide money each year for such needs.  This endowment fund is working today for Brookville students.

In keeping with his interest in the well being of young students, the Froman family: Alberta, his wife, and his sons, Mike, Bill, and Jack, have established The Ralph Froman Memorial Fund through the Brookville Foundation.  Monies from the income through the endowed funds will annually be set up in a discretionary fund at Brookville Elementary to be used for students who have needs, thus keeping alive Ralph Froman’s concern in helping youth.

As funds for the endowment grow, income for helping students in need will increase.  Those interested in helping the endowment grow may provide gifts to the Ralph Froman Memorial Fund.  All gifts will be invested and income will be utilized forthe students.  Gifts can be sent to The Brookville Foundation, PO Box 184, Brookville, Indiana 47012 or call (765)647-5818.*